As the school years slowly comes to a close, many sports and clubs will be meeting for the last time. One club that I have had the opportunity to be a part of for the last three years has been academic games, which is proctored by Mr. Schrader. It is a club that is both very popular and shrouded in mystery for not many really know what the games are. The biggest question that players face is; what do you guys do?

The answer for the past three years has been very simple, we play games of an academic nature. This however does not really answer the question, what are the Academic Games?

There are six games that the Western Pennsylvania Academic Games League (WPAGL) plays. Those are Equations, Presidents, On Sets, Propaganda, Linguishtik, and World Events. There is a seventh game that our local league, WPAGL doesn’t play, it is called WFF, n Proof, it was also the first academic game invented. This brings up another question, who invented the academic games? If you would have asked be a year or two ago I would have said that they were made by smart people who wanted to show how smart they were but now I know the real answer.

Robert Allen who was the founder of the National Academic Games Project the precursor to the Academic Games League of America (AGLOA) which we are part of now. Robert and his brother Layman E. Allen a professor at the University of Michigan and they both are the creators of the seven games that are played at nationals. The question remains though, what are the games? 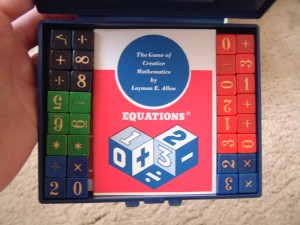 Equations is the first game that WPAGL plays, it is a math based game where the players try to create an equation that fits a given solution. The game is played in shakes or rolls, a shake begins when one player rolls the dice. The dice will be either numbers or mathematical symbols of operations. Players will move the dice into either, Forbidden, Permitted, or Required places on the mat. When the players make their equation they will have to use the required, and cannot use the forbidden. The scoring is in terms of 6, 4, 2, and the qualifying score is usually 12-16.

Presidents is a game about surprise, the presidents of the United States, players predict the president based on three clues on the president the first clue is worth 6, the second 4, and the third 2. The has two two rounds one for the presidents 1-24, and the second for presidents 25-44. Before the question is read you will receive a range of about ten presidents and then they begin by reading the six point clue. Qualifying score is determined by the top 20% of the scores.

On-sets is the game of set theory. The players roll dice and on the dice there will either be colors or summation symbols. One player will also deal out 6 to 15 cards that will have colors on them, this is called the universe. There are three dice that have numbers on them and the players try to make a solution out of them. The goal is to make an equation using the colors and summation symbols, to eliminate enough cards in the universe to that remaining cards equals the solution. Easy right? Again players take turns moving cubes onto the playing met until someone calls challenge now or challenge never. Challenge now means that a player can solve for the solution right now. Challenge never means that a player thinks that no one can solve for the solution. Points are dished out in terms of a 6, 4, or 2. National qualifying score again is 12-16.

Propaganda is where students read a statement or an ad campaign and they have to try and guess the style of propaganda they are trying to use to persuade them. They will give a list of the types of propaganda, and it is divided up into sections. There are six, but each game only uses three. A player can, however, lose points in this game. Before the question is read you will either pick ‘bold’ or ‘safe.’ If a player picks bold and the answer is wrong that player will gain a negative score. If the player chooses safe, and gets it wrong, that player will not lose any points. 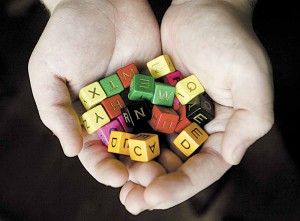 Linguishtik is a grammar and English game where players try to make a sentence using restrictions that are declared beforehand. First a player rolls the dice which all have different letters on them and they another player calls out the sentence structure. then a third player calls out what kind word is needed, ie. noun, verb,adjective, etc. Then the function is called out, modifier, subject, or predicate to name a few. Then each player moves the cubes to the mat. When someone wants to ‘challenge now’ they will have three minutes to create a sentence with the correct structure and then make a word with the letters on the mat that is the right function and type.

Lastly, we get to world events, our best game here at Seton-La Salle. There are four rounds, two current event rounds, and two rounds on a predetermined period or event in history. The current event rounds are multiple choice, and you wager 2, 4, or 6, points after they read the category title. Categories are usually people in the news, world news, sports, celebrities, and economics. You can lose points for an wrong answer. The current events round, the questions are taken from the events of the previous year. Players do not wager points, but the questions have pre-set values. Players cannot lose points for a wrong answer in the current events round.

Wff N Proof, is not played in our league, like I said earlier so my knowledge of it is very limited. It was the first of the games to be created and played. It is a cube game, and from my research I can infer that it is a game of symbolic logic. Players use cubes that have symbols on them to make a proof.

So those are the games but, what is their value? What can anyone gain from playing these games?

Two time, national medal winning senior, Ryan Milcarek, said, “From Academic Games, I acquired critical thinking skills which were extremely useful in several classes at school, including chemistry and math classes.” This is the experience of many. Through Academic Games people can learn to think on your feet, adapt to changing situations, and infer from given materials. The games are subject specific but, players will gain much more from them then just facts or formulas.

Benjamin Schrader is the proctor of Academic Games and played the games himself, while he was in high school. “Most of my friends, played Academic Games in High School and I made lifelong friends through Academic Games. I played through High School, had a few nice trips to nationals, and many great memories,” said Schrader.

Mr. Schrader brought Academic Games to Seton – La Salle. Schrader said, “ Connor Hayes was playing Academic Games with the Mt. Lebanon team. Since I played in high school we would talk about it. Eventually we came together and created the team here at Seton- La Salle.”

So Academic games helps to develop critical thinking skill and foster life long friendships, but down the road, say ten or twenty years from now will any of those games help?

Milcarek said, “Academic Games will help me later in life because I am now able to see problems from several points of view. Especially from On-Sets and Equations, I feel that I will be able to find multiple angles from which to view problems and solve them.”

Mr. Schrader feels that playing academic games, made an impact on his life after he was done playing them. “ It definitely helped me with critical thinking, and researching too. Some of the games take a long time to master and require you to look ahead two or even three moves. It also helped me develop social skills, meeting and relating to kids that I didn’t know, which came in handy at college.”

Now that my Academic Games career has come to a close I would encourage any student next year , freshman, sophomore, junior, or even if you want to start in your senior year, to give it a try. Go and talk with Mr. Schrader. Go to one event. You won’t regret it and best of luck to next year’s team!