Our resident anonymous television/movie reviewer has recently revealed his/her opinion of the AMC hit series, The Walking Dead. Apparently, whoever this ‘Netflix Ninja’ is does not seem to be a fan of the popular show. The highest-rated show to play on Sunday nights, it hit a record high last season on the finale with 12.4 million viewers and 16.1 in the season four premier; I guess our Ninja was not one of them. The Ninja seems be confused about some parts of show, which really only proves to me and to the rest of the millions of people who like the show, that he did not take the time to pay attention and note  the creative genius that the show has to offer. 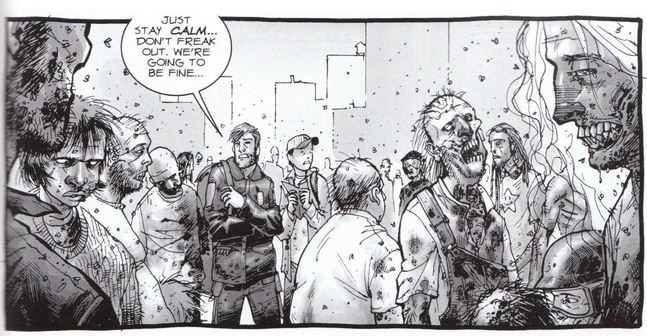 As a Walking Dead fan who has watched since season one, episode one, I can recognize some of the flaws that obviously are there. However, I also understand that being the highest rated show, it has a lot of expectations, and personally I think that the network does a good job of satisfying its viewers.

For those few who live under a rock and have no idea what The Walking Dead even is, it is a TV series on AMC based on a comic book series written by Robert Kirkman about a zombie apocalypse.

It focuses on the lives of the few people who have managed to survive and the horrors they now have to deal with in their new zombie-ridden world.

Main character, Rick Grimes, who is a former police sheriff leads the group of survivors. In season one, the focus is on understanding the initial situation and looking for safety and answers in the Center for Disease Control.

Then, season two takes the constantly changing group to a farm and expands on their knowledge gained in the events of season one.

Season three focuses on the group’s new life in a prison and a developing enemy from a small town that happens to be zombie-free and in the same location as the group’s prison-home.

Finally, the new fourth season so far has brought us up to date on the group’s condition and set the stage for a new catastrophe.

The Walking Dead has become so popular that a talk show was created to discuss and analyze the show following the premiere of each episode: Talking Dead, which is also very popular with 5.2 million viewers, was started purely because of the open-ended nature of the show. 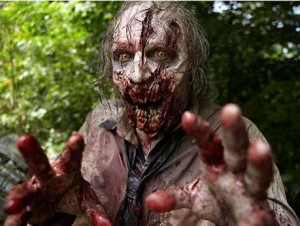 Part of the series’ success is its ability to evoke emotion and discussion from its viewers, IT HAS PLOT HOLES ON PURPOSE! Obviously in a zombie apocalypse life would not be perfect. The show makes its viewers feel, think, and sympathize with the characters on the show.

The special effects, especially the makeup effects of the show, truly make it come to life. If you’re not watching because you don’t like the plot, you might as well watch just for the special effects. The show is essentially movie quality on a TV budget. It’s really pretty impressive.

Greg Nicotero is credited for the zombie’s makeup. The budget for just one episode of season one was $3.4 million, in season two it was decreased to $2.8 million, and was then increased again in season three due to an increase in ratings. Although this might sound like a lot, watching one episode and seeing the zombies, you would quickly realize where all that money must be going to.

The Ninja had quite a few questions about the show that I am guessing are questions a lot of people must have.  Here are my answers:

“Why does it never rain except for the time it was inconvenient to Rick?”

Well as I mentioned, this is a TV budget and shooting scenes in the rain is much more costly. In order to make it rain they would need some pretty powerful sprinklers. I admit it only rained that one time where yes it was inconvenient for Rick, and maybe that took away some of the realism for certain people, but honestly it only added to the suspense of the show.

“Isn’t it kind of convenient that Rick and Shane are both police officers and deadshots?”

Well the fact that they are police officers and have good aim really isn’t shocking. Would you want to have armed police officers that are suppose to protect you, but have no accuracy shooting a gun? Obviously a cop can shoot.

“Why are they acting like cars and gas are hard to find? If everyone is dead, can’t they syphon gas and steal cars, and not have to pay for gas at gas stations anymore?”

When has there ever been an episode that focuses on their need of a car? That has never been an issue.

“The jail in season 3? Doesn’t that seem a little TOO perfect?”

What better place to go? What was originally used to keep people in, they’re now using to keep zombies out. Why is that so crazy? I mean it’s the zombie apocalypse, these people have had the worst luck ever, but just this once they had enough luck to stumble upon a great location to live.

“Daryl hunts food with the same arrows he kills zombies with? Even if that doesn’t infect them since they are all infected anyway, that is still unsanitary.” It’s the zombie apocalypse. The entire world and human race collapsing. If it was you, do you really think that sanitizing the arrows would be your biggest problem or concern?

“In season 2, which was supposed to be after 2010 (when the first episode with the apocalypse happened) Why are they driving a 2012 Hyundai Tucson?” The show’s setting is Atlanta, Georgia in no specific time setting. If you’re arguing that it takes place in 2010 because that’s when the show premiered, you would be wrong. If anything, the time setting would be between 2003-2004 because that’s the time period in the comic books and when they were published. However, either way the Ninja would still be right about the 2012 Hyundai Tucson not fitting the set.  (Which I found out was a 2011 not a 2012.) So I will give that to the Ninja even though that’s just being extremely picky. Even though they use this one car out of context, they also drive a handful of other vehicles that actually fit the time frame, such as a 1999 Ford Crown Victoria, 1987-1991 Jeep Wranglers, and Daryl’s motorcycle, a 1976 Triumph Bonneville Hardtail Frame Conversion.

“Why do I hate Laurie so much?” I admit I hate Laurie too. I don’t think that there are really too many people that actually like her. Honestly, I think we’re suppose to dislike her, she’s more of an antagonist than anything.

“Why are there massive 300 car pile-ups on the highway? Were the zombies driving?” I think it’s safe to assume that when the apocalypse first happened there were people driving on the highway. There is always a chance of there being a bad accident on the highway even on a good day, so on a day like the zombie apocalypse it doesn’t seem far fetched for there to be bad pile ups on the highways. Then you have to assume some people would get out to see what was going on and abandon their cars, but then meet a horrible fate and never return to them. Finally, on top of that there had to be the initial mass of people trying to escape their homes and find safety somewhere else, but too many people trying to get out at once, met with a herd of walkers, and the cars never made it further than the highway and that’s where they’ve remained. I think 300 is a bit of an exaggeration for that number.

“Who is cutting the grass of the jail?” Really? That seems like a pointless question. It’s not as if the grass is perfect and freshly cut or anything close to it. It is fairly overgrown, sloppy, and somewhat dead. The only exception to that would be the places in season four where Rick has dug out his small farming and gardening area. Honestly though,  if you’re really asking this question then you must just be looking for reasons to hate the show.

“How do the zombies “smell” the survivors if the only organ that reanimates is the brain?” I admit I really don’t have an answer to that question. They are monsters on a fictional show and that’s just how the zombies are. There’s no right or wrong way to conjure up a zombie image, and that’s just how the creator of the show decided to do it. It makes sense in my opinion.

“Why don’t they just call them ZOMBIES!?” Rick Kirkman, writer of the 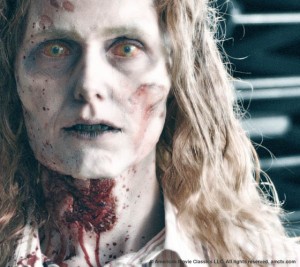 comics and producer of the show, has actually given an answer to this question. “”One of the things about this world is that people don’t know how to shoot people in the head at first, and they’re not familiar with zombies, per se,” Kirkman said on “Talking Dead.” “This isn’t a world the (George) Romero movies exist, for instance … because we don’t want to portray it that way, we felt like having them be saying ‘zombie’ all the time would harken back to all of the zombie films which we, in the real world, know about. So by calling them something different, we’re kind of giving a nod to … these people don’t understand the situation. They’ve never seen this in pop culture, this is a completely new thing for them.”

“If everyone is infected already, why do bites automatically turn you into a zombie? It doesn’t kill you.” I have no proven answer to this question either, but as I said the show is suppose to make you think. There are many theories to discuss on this particular subject, but there is one that I prefer to think is the intended answers. Every person’s mouth is the home of hundreds of thousands of germs and bacteria. Being bitten by a healthy person even requires careful treatment to prevent infection. Suffering from a severe bite like the kind the walkers inflict on their victims in the show presents the same need for care on a much larger scale. The bite isn’t instantaneously changing people into zombies. First they develop a fever due to the infection transferred to them by the walker’s saliva, then they die from the illness, and finally come back from the dead because of the virus they were previously infected with that activates after they die.

“Why should I care about the governor?” In season three, the governor is the leader of a town called Woodbury. He turns out to be mentally unstable and a threat to Rick and the rest of his group. You should care about him because essentially he is deciding the fate of the lives of those who live in the prison. He is the antagonist and main enemy of the protagonists.

In case I haven’t made it clear previously, I happen to like The Walking Dead. I recognize some of the points that the Ninja made as valid, but I don’t believe that those reasons are enough to define it as a bad show. Overall, I think it’s a great show; it has become one of my favorite over the past three seasons and I look forward to seeing what season four has in store.