The Rebel Room, updated only a few weeks ago, still stands as a mystery to some students. Located off of the cafeteria beside the left staircase, the Rebel Room is hard to miss while having lunch in the cafeteria everyday due to the colorful new mural on the back wall. Despite this bright addition, only few seem to know about its purpose. Freshman Anna Fitzgibbon shares this confusion. “I honestly have no idea what it will be used for,” she says.

Other students have a more accurate picture in mind. “At lunchtime, it’s going to have games in it, like ping-pong and air hockey,” says Griffin Gillespie, a freshman.

After speaking with Mr. Dattilo, the president of Seton-La Salle, the Rebel Room’s future was made clear. “It will have all kinds of games, such as foosball and gaming tables for chess and checkers,” Dattilo says.

Though the Rebel Room is a place for games, it has a much larger role to play. “You have about forty minutes to eat lunch, and only about ten you spend actually eating. The rest of the time most kids spend on their phone. The Rebel Room will encourage interaction between students,” says Dattilo.

The Rebel Room before it was transformed was just a “dust gatherer” and “wasted space,” in the words of Dattilo. 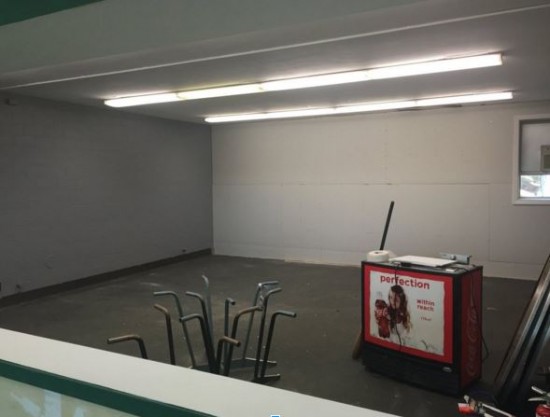 Though the fencing equipment and Crossroads workers will have to relocate, it is for a good cause. Giving all students, especially students new to the school and freshmen, a chance to interact with students outside of their classes or in a different grade altogether will prove to be beneficial. Once the games are inhabiting the empty space, this theory will be tested.