A dress down day for many used to be an opportunity to wear sweatpants or jeans but in the last few years these days are becoming a way for students to show off their sneakers. This article is a follow-up to Levi Mausa’s popular article SLS Kicks which ranked many Seton-La Salle students on their shoe game. The popularity of buying, selling and collecting sneakers has been on the rise and many people do not fully understand the culture behind sneakerheads. A sneakerhead is defined as is a person who collects, trades or admires sneakers as a form of hobby. This hobby is for all genders and ages which helps its popularity. Senior Crystal Joyce spoke about this saying “ I love sneakerheads and you can tell a lot about a person by their shoes.”

This hobby has grown with events like Refresh Pgh and Sneakercon that allows sneakers from the Pittsburgh Area to buy , sell and trade sneakers. Many of the students of Seton La-Salle have attended these events. Senior Brendan Reichert said “ I think the sneaker events are great. It’s a way for sneakerheads to connect, meet new friends, and come together as a community. As for Refresh Pgh, I think its awesome for Pittsburgh, and it was a great event. Just to bring that many people together for one day was crazy and I was definitely glad I was able to make it.”. 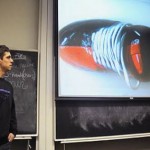 In addition to the events for sneakerheads local college Carnegie Mellon University offers a course Sneakerology 101 which deals with the history of sneakers and sneaker collecting.

This culture of being a sneakerhead is a lifestyle for many and will keep gaining popularity in the future. For younger sneakerheads they may not have been collecting for as long others but they are a driving force in the sales of sneakers. Freshman Christian Wyrick said “ I feel like it is almost is like a competition throughout the school to see who has the coolest, rarest and most shoes.”

I also asked him what his favorite pair of shoes were and he said the Nike Foamposite Galaxy which released in 2012 and has been considered one of the rarest shoes out there. Next time you are in the halls of Seton-La Salle take a look down and you may see some “Nice Kicks”.