For the first time since December 5th, Pittsburgh Penguins superstar captain, Sidney Crosby, has been cleared for contact, and has not suffered any setbacks since returning to the ice. Crosby has had a rough 14 months with injuries to his head and neck. On March 7, 2012, Crosby missed his 38th consecutive game, but feels confident that he could be back during the weekend, or possibly within the next week. 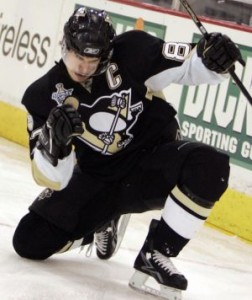 Great caution is being taken with Crosby’s return. Crosby returned earlier in the season against the New York Islanders, and played a fantastic game, but was quickly sidelined again after only a handful of games. Crosby has seen and has been seeing many doctors and specialists in order to treat his injuries.

With all of the hype about Sidney Crosby’s return, the teams’ 7 game winning streak has slightly been overshadowed. Even with Crosby’s return, it does not look like the line that includes Chris Kunitz, Evgeni Malkin, and James Neal will be broken up. Even Crosby himself has shared his thoughts that they were possibly the best line in hockey over the last two months.

Overall, Sidney Crosby is an important figure to the Pittsburgh Penguins organization. Not only is he the captain of the team, he also inspires his teammates and the fans with his play. Crosby is truly a great leader, and the Penguins, the fans, Pittsburgh, and the entire hockey universe are awaiting his return to the ice of the Consol Energy Center.