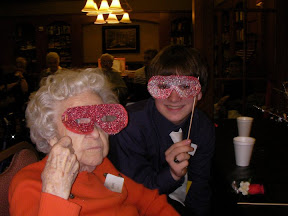 On Saturday, March 13th, around fifty members of Seton-La Salle’s junior class participated in the “Junior-Senior Prom” at the Devonshire. This Masquerade-themed event was a chance for students and assisted-living Devonshire residents to meet and enjoy a night in each other’s company. Each student was paired with a senior citizen “date.” Students went upstairs to pick their dates up from their rooms and gave them handmade corsages. This beginning to the night was eventful in itself. Sometimes it took a little charm and cajoling to nudge the residents downstairs from their rooms, but fortunately, all of the students handled this problem with poise and humor. Eventually, all the couples returned downstairs and settled in for an hour and a half of conversation, storytelling and dancing. The dance floor was always crowded; even people using wheelchairs and walkers were swaying and clapping to the music, which was played by a great DJ.  Both Seton students and Devonshire residents seemed to have a lot of fun. As voted by the prom-goers, residents Red and Ann received the honor of being named Prom King and Queen.

I know it was personally touching for me to hear the stories of my date, Mike, who was ninety-three years old. He told me all about his late wife, to whom he’d been married for sixty years, and his son. We talked about his graduation from Duquesne after ten years of putting himself through night school. He had never been to a prom in his life because when he graduated from South High School in the early 1930’s high school proms didn’t happen. I am very grateful that we were able to provide him, and so many deserving others like him, with the opportunity to attend a prom. I know I wasn’t the only one affected, either. One student said, “The junior-senior prom was an amazing experience I’ll never forget. It was so much fun and I learned a lot.”

Thank you to everyone who attended and gave their time to make this night special for all the residents of the Devonshire, especially to Katie Welsh and Mrs. Wray for putting the whole night together, and to the Devonshire staff for being so supportive. This was a very memorable and touching evening for everyone, and this year’s junior class is so thankful for getting the opportunity to take part in it. I hope next year’s juniors feel the same way, and may they carry on this wonderful tradition with pride.