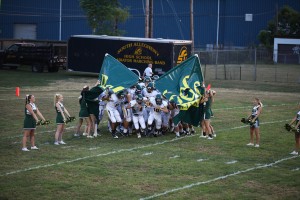 The 2012 Seton – La Salle football team is quickly approaching the end of the regular season and preparing for playoffs.  The Rebels currently have a 7-1 record and look to win their final game against South Park on October 26.  Plagued with injuries and working through other emotional adversities throughout the year, the Rebels had to dig deep and fight on to continue with their winning ways.  This team features players from all grades that have big impacts on the team’s performance this season.  Here are a few of those players:

Louis Rotunda, senior, has had a season to remember, accounting for 13 of the team’s touchdowns, two of them coming on defense.  The recent passing of his father inspired him to play at the level that he has. Louis’ hard work in his time at Seton – La Salle is finally paying off in a major way.

Nicholas Agliori, also a senior, has been a dominating force on both sides of the ball.  While fighting through various injuries throughout the year, Nick anchors the line on offense, clearing paths to run through and protecting our quarterback, Luke Brumbaugh.  On defense he has had excellent play, being a stout defensive tackle and making a large majority of the tackles.

Thomas Rizza, junior, a two year starter, has been a playmaker on offense, shaking defenders and marching up and down the field every week.  Tom also is a lockdown corner on defense, not letting any wide receiver catch a pass without paying a price.  Tom has overcome offseason injuries to have another successful season.

DeQuay Broadwater, sophomore, is one of the breakout players to the 2012 season.  Broadwater has started the whole season at linebacker, making impressive tackles and an interception for a touchdown.  Broadwater has also started at running back when needed and has performed very well.  His future in Seton – La Salle is very bright.

Jacob Blahut, sophomore, has been a great help to the Rebels this season.  A hardworking lineman on both sides of the ball who shows great potential, has become an impact player for the Rebels. Now the starting center, he has matured fast and is competitive with everyone he faces.

Zach Devenney, freshman, was at one time the only freshman to dress on the varsity football team.  He, along with many other young players in the freshman class, shows a large amount of potential.