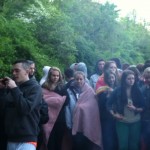 On a chilly Monday morning, members of the senior class gathered before dawn to celebrate the beginning of their final week together as a class. The chilling start of the day was not enough to dampen the spirits or the upbeat mood of the class of 2013. The annual Senior Cookout was an event of good times and even better memories as friends reflected upon their last four years of high school together.

The cookout started slowly, but by time the sun rose in the morning sky, the majority of the class had shown up. Initially, the class’ “Wolfpack” started the festivities by lighting a small bonfire, which was the only source of heat and light that cold morning. The crowd steadily grew as dark turned to light.

There was more than enough food to go around. Students brought snacks and large amounts of breakfast foods to add to the usual cookout fare.

Even though I had come to know these people very well over the years, the culinary talents of Tom 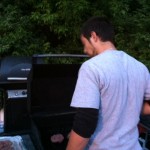 Kalnas and Tyler Slagle remained unknown until the cookout. Ty proved to be a master griller of hamburgers and hotdogs, while Tom was the master of all things bacon, delivering those strips of glory to everyone surrounding his Weber grill. Much of the action took place around the original bonfire where my classmates huddled, like penguins in the arctic, for warmth.

It was the coldest May morning in living memory, or so it seemed, but no one seemed to mind. An event organized by the senior class, for the senior class; the cookout turned out to be a major success and continues 2013’s legacy as part of the Seton -La Salle Community.