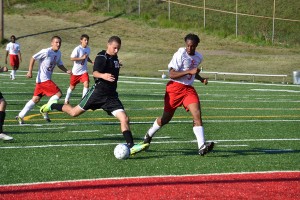 Tradition; excellence; a history of champions,  describes one of the most winning teams in the last decade at Seton-La Salle Catholic High School, and in the state of Pennsylvania – the Rebels Varsity boy’s soccer team.  Every fall they take the field and demonstrate supremacy over the teams that they face.

Winning is all these boys know, and they don’t want to learn anything different.

The Seton-La Salle boys soccer team looks to continue their success in the 2012 season.  In the last 6 years, the Rebels have won four WPIAL soccer titles, and two of those teams went on to win the PIAA state soccer title in A.

The 2012 team is off to a 4-1 start to the season and is looking as good as ever. I got a chance to catch up with senior player, Eric Albright, a member of the soccer team since 2009 and a two-time WPIAL champion.  Eric attributes excellent team play to their early success,

“Every player works as hard as they can for the good of the team. A lot of these players have made big sacrifices to win games,” said Albright.
Seton – La Salle lost several key players from last year’s team but have plenty of new players stepping up to fill their spots.

Eric, a captain of the soccer team, has stepped into a leadership role by pushing everyone to work as hard as they can to be the best they can be. He includes himself in the challenge.

“I have stepped up by leading the team on defense and making the right decisions on the field and making less mistakes,” says Albright.

The burning question is, of course, can they finish the season with their third straight WPIAL title? History has shown, in any sport, at any level, even winning two consecutive years is difficult.

Winning three years in a row will not be an easy feat, according to Albright, but it most certainly can be done. “It’s going to be tough. But if our team has a lot of heart, we work hard and want it bad enough we can win it again.”