While most teenagers were sleeping off too much Christmas candy, or binge-watching Netflix, the Rebel Swimmers were hard at work at the Thelma Yvette YMCA Pool in downtown Pittsburgh, beginning the day after Christmas and only taking a break for New Year’s Day. They had begun weeks before with exhibition meets, but this week was what counted. This week was the peak of their yardage, the hardest week of the season, infamously named Hell Week by many a Rebel Swimmer, past and present. When break ended, their section meets began. Those meets counted. Section Titles were on the line. WPIAL times were on the line. And, boy, were the Rebel Swimmers going to make a splash this season!

As soon as the meets began, Rebel Swimming started to win. The Girls team (3-4) won three meets: Cornell, Serra Catholic, and South Park. The Boys team (4-3) likewise won at Cornell and Serra Catholic, but also racked up wins at Beaver and Ringgold, for 4 wins thus far.

Coach Meloni DiPietro-Guthoerl is ecstatic for the wins and qualifying times, while also looking toward the future. She says, “ Our season has been progressing remarkably well. We have many fast senior swimmers that will be hard to let go next year, as it always is. But, I wish them the best. Looking forward, I am excited for the future of Rebel Swimming as we have received many new fast swimmers, and I can’t wait to work more with them.”

Senior Matt Bissert has grown into an elite swimmer with three years of WPIAL competition experience.  This season, he unexpectedly broke his foot, which disappointed the team.  Bissert was still elected captain, along with Pearce, Kisker and Paige Garase.  Bissert faithfully attends practice and meets on crutches to cheer on his team. “We have a lot of fun and we also work really hard, and it has shown and continues to show,” says Bissert.

When Grayson Kisker started his freshman year, he struggled to complete a flip-turn.  Now, he trains in the distance lane with Pearce and Garase and has been a part of WPIAL-qualifying relays, this year and last year. “Swimming has been a worthwhile journey for me and for all of us,” says Kisker.

In contrast, the freshman and new swimmers look forward to what they hope to achieve in their time here on the Rebel Swim Team.  Some joined because of peer pressure in their family.

Sarah Farnan is the 6th of the Farnans to go through the Rebel Swimming program, “I hope to improve my skills, become stronger and more muscular, and most importantly- have fun!” says Farnan.

A unexpected gift arrived when Cullin Baker hung up his football pads forever to strap on googles. After he broke his femur, the doctors told Baker he could no longer compete in contact sports. In his first year as a sophomore on the swim team, he has become one of the only two swimmers to qualify for WPIALS in an individual event so far. Looking forward, Baker says “I hope to achieve at a higher level and consistently get better over the coming years.”

Freshmen James Sanchioli and Tegan Collins first considered joining Rebel Swim Team during band camp up on Merrick Field. Several members of the marching band are also on the Rebel Swim Team and routinely recruit straight from Marching Band.  The freshmen decided to give it a try, and have shown enormous potential in the water so far. “I hope to work hard enough to make it to WPIALS eventually,” says Sanchioli. 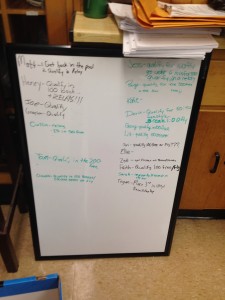 Another component to any sport is goal-setting. Coach D knows this better than anyone, by starting out the season strong by helping the swimmers create this goal chart. It is always accessible to the swimmers to see and to change, if they would like. It also sets a standard for the swimmers to live up to the whole season, and to hold each other accountable for working towards those goals.

Rebel Swimming has kicked off in a great stride and best wishes for this to continue for the Rebel Swimmers. 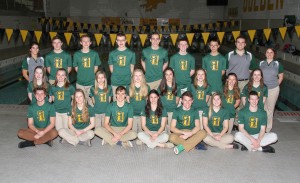