Seton-La Salle High School is full of many awesome and athletic sports for both girls and boys. One group that is frequently over looked is girls’ softball team. People often talk about girls’ basketball, or girls’ lacrosse, and the football team. Well, that’s not fair to the girls who work really hard all year round and play on our own Lady Rebels’ softball team. The girls play and practice from the end of August up until the end of their season. They participate in fall ball, winter conditioning, the pre-season, the regular season and post-season. Now they will even participate in playing summer ball together. This is a lot of work to put into a sport that only has a regular season of two and a half to three months.
The Rebel’s offense was lead 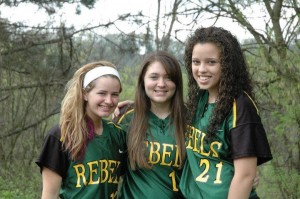 by their starting lineup of Marisa McAndrews, Christina Folino, Michelle Potenziani, Jess Weiss, Raelyn Fencik, Taylor Mercurio, Lauren Zola, Kaylee Boehme and Dani Dadig. They had a strong pitching-catching combination of Zola and Weiss and behind them was an even stronger infield of Potenziani, McAndrews, Mercurio and Folino.
Despite their impressive regular season record of 14-0, they suffered their only loss against Greensburg Central Catholic in the quarter finals of the playoffs ending the season 15-1. “We had a great season and we worked hard to get where we got. None of us thought we would do as well as we did, and now that we got so far, we are hoping for so much more in seasons to come,” says Zola. Even though the girls lost in the second round they are a young and rising team. Congratulations Lady Rebels and best of luck next season.