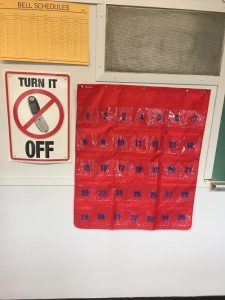 As everyone knows the school has purchased phone holders as a way for teachers to get students off their phones during class. The question is, have these phone holders done their job?

When asked, some of the freshman responded with that they do not. Most of the feedback was the same with responses such as, “They’re pointless”, or “I don’t like them”. The reason behind this is because of the fact that no one really uses them. We are given the option of keeping them in our pockets, putting them in our lockers, or leaving them in the phone holders.

Personally, I don’t use the phone holders because I have already forgotten my phone in them several times. After an entire day of school I would go back to get my phone. I’ve also heard of other students forgetting their phones as well which leads me to my next point. With the phone holders being so close to the door in each room, someone could easily take someone else’s phone.

Whether it’s on purpose or by accident, someone could walk out with a phone that is not theirs.. These phone holders also defeat the purpose of the someone having their phones out in class. Before when someone was on their phone and a teacher would see them, the teacher would usually take it away and give them a disciplinary point.

However, teachers will now just take them and put them away in the phone holders so the students can take them and use them in the next class. Some teachers have taken the phone holders down because no one was using them. I personally don’t use them because I forget to get my phone when I’m focused on getting to my next class and I get worried that someone might take my phone. Nevertheless does it hurt to have something to hold our phones?