Editor’s Note: Every masked crusader needs a good editor?  This edition of the ‘Ninja’ features editor’s commentary highlighted in RED.  If it is in red, it is my opinion.  Imposed on our Ninja with his permission.

My name, for those of you who do not know me is _ _ _ _ _ _ but you can just call me the “Netflix Ninja.”  I’m kind of the unsung hero of Seton, saving its students from the bore of their school lives with recommendations for movies available on Netflix. If you don’t know what Netflix is… We aren’t friends. That’s just so sad (shakes head, in agreement) that you don’t know. Hopefully, someday you will move out from under the rock you must be living under. Now that I have gotten that stuff out of the way, allow me to tell you a little about my summer. (My favorite Back-to-School Assignment)

Netflix has revolutionized my summer routine. I have a smartphone, and with this smartphone I am able to access my Netflix account anywhere where there is Wi-fi. This includes all the rooms of my home. (So you’re like those Bostonian Guys, who sell the ‘Hopper?’)

My summer days were filled with uninterrupted binge watching of TV shows and movies to the point that my brain is most definitely mushy at this point.  If I wasn’t watching Netflix it was finding crazy new channels to explore on YOUTUBE. Please check out cinemasins.

In addition to this crazy Netflix schedule I also found myself playing video games, lots of them. Super Smash Bro’s Brawl is my game and I am willing to accept any and all challengers. I also found some great music groups. Currently I am into German screamo, the band TORU OKADA has some very intense stuff. (Seriously, Screamo? This is not music. It is noise.  Try Ska, if you like this sort of noise. Then try music. It is better.)  But that isn’t why you read this, is it? Well, with all of that out of the way, I now present that shows I have stumbled upon during my summer search: 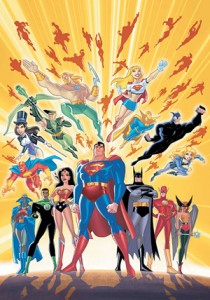 1.) Justice League Unlimited- You like Batman right? Come on, if you answered no, you’re lying to yourself. Of course you like Batman. Everyone likes Batman. Do you like Superman? (The Man of Steel movie was average.) What about Wonder Woman, are you a fan? (I like the outfit.)

What if all of these characters were in the same show? Exactly: awesome. (falsetto voice) Justice League Unlimited is available on Netflix right now. Airing on Cartoon Network in 2004, this show has two seasons of pure crime fighting awesomeness. You don’t even need to appreciate superheroes to like the witty banter and bad guy poundings this show dishes out. I am not a very big comic book guy, but seeing timeless characters such as Green Lantern and others kick butt makes this show one of the best. Most people confuse this show with its earlier ancestor, Justice League which is also available on Netflix, and which aired in 2001. Based on my personal opinion, the 2004 reboot was much better. Aside from an entirely too long opening credits screen (Sometimes, it is the little things that undermine great effort.  Like grammar. HINT, HINT) every episode, is excellent. I find nothing at fault with this animated series and have seen every episode, of both seasons, about 3 times now.

2.) Another spectacular Netflix smash hit is: Who Framed Roger Rabbit. This movie is 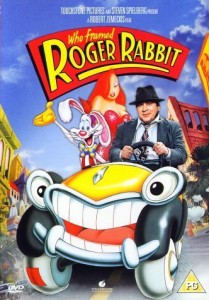 not to be missed, as it holds a special place in cinema history. (Agreed!) The premise of the movie is similar to Space Jam, as it has both animated and real characters. However, this movie came before Space Jam, making it the first animation/live action film in history. This isn’t the only reason you should kill the time to watch this movie. In addition to all of this, the movie is actually really funny. It has the slapstick comedy you’d expect from an animated film, but it’s not exactly the kid friendly movie the animation implies it would be. The movie is more of an adult animated movie, with a few parts not really suitable for children. (Jessica <3’s Roger 4ever) I am a very big fan of the movie and was super excited to see it appear on the Netflix servers.

3.) The best thing that I watched all summer on Netflix besides all of the television shows was a movie called The Road. (Urg – The Road is a far better book than a movie. – modern novel style, which I hate; meets classic dystopia, which I love.) I’m not exactly sure why I liked the movie as it fits none of the criteria that typically define a movie I like. It did feature that actor with the crazy foreign name from Lord of the Rings, Aragorn. (Viggo Mortensen – and because you are lazy, I just had to look up this spelling.) You know, the guy with the really big sword and the long black hair and all that; yeah him. He and this kid are just traversing the post-apocalyptic setting. It’s kind of like Book of Eli without the awesome butt-kicking that came along with Book of Eli. I have a thing for post-apocalyptic movies, because it seems more likely to happen. (Than zombies?) But I digress. (As always, and thanks.)