Hello all, I had to take a little break for Homecoming, a ninja’s gotta get his grind on. Now I am back and rearing and gearing for another round of Movies. These next few weeks will be my choices of horror movies for Halloween, as well as one large review that will come out right before Halloween. 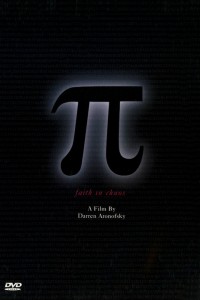 This week’s review goes to a film called ‘Pi’. This psychological surealist horror film, stars Sean Gullete as a mathematical genius. He goes through the whole movie being haunted by numbers. The film describes his career as a “number theorist” which seems rather goofy if you ask me. How does one theorize about numbers? Anyway the plot follows him as he is on the brink of discovering the mathematical pattern to the stock market. Midway through the movie his computer spits out a random 216 digit number and then crashes. He goes and meets this hasidic Jewish character, who explains that the whole Torah is actually a coded system and life all follows this system of numbers. He begins to go insane trying to get this number back. as he slowly descends into madness. Eventually a weird lump begins to grow on his temple and his one and only friend begs and pleads with him to end his work. He starts to see numbers in everything. The story is actually horrendous. There is no bad guy, unless you count math as the bad guy. (Which I do, Ms. Senger, I do) The film was also in black and white even though it was released in 1998. The music track is corny and the plot is confusing, it feels like I should always be holding a piece of paper and solving math problems. I laughed out loud a few times when the actor begins to sweat because of math (much like me). This movie is a gigantic waste of time, but watching it was good for a laugh if you have as much free time as I do..

I am a huge horror film fan. I can’t get enough. One of the best ones that I have seen in 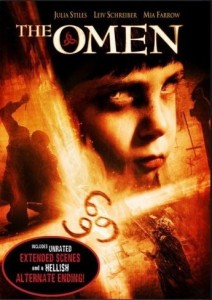 awhile was the remake of the 1976 film the ‘Omen.’ Made in 2006, this film follows an American diplomat stationed in Italy. His first son was born and died soon afterward, but the family chooses to adopt a son whose mother died in childbirth. His name is Damien.  Strange things begin happening around the family, culminating with Damien’s nanny hanging herself at a birthday party. Soon afterward, Robert (the diplomat) is approached by a priest who seems to somehow be aware of Damien and possibly a strange truth about him. Eventually it climaxes to the point of struggle whenever Robert is convinced by the priest to kill his adopted son. Overall, the movie ends brilliantly. Also, if you’re like me and tend to enjoy the psychological horror films over the slasher movies, then this movie is perfect for your enjoyment.