Gun control is like the annoying family member you hate to see. No matter how much you disdain seeing them or talking to them, eventually a climatic event, family reunion, or holiday forces you to have interaction with them. After the tragic Newtown shooting, gun control has again risen to the forefront of political controversy and debate. This is not the first time gun control has been debated and argued, but in recent years both sides ideology have drifted so far apart it is nearly impossible for meaningful legislation to be passed.

The arguments in favor or against gun control are very polarized. On one side, you have the pro-gun supporters, often represented by the powerful NRA (National Rifle Association). Pro-gun supporters have had the same arguments against gun control for generations: Guns don’t kill people, people kill people. The media should also receive part of the blame for mass shootings. America’s mental health system doesn’t always get people the help they need. Law enforcement already doesn’t enforce gun laws as much as they should. They argue violent video games and other forms of enjoyment have led and will continue to lead to more violent generations. Finally, the NRA has begun to argue that we should arm our schools.

Meanwhile, anti-gun supporters have a very different view on the causes of these mass shootings and the best way to stop them. First, anti-gun supporters point to the fact that after extensive research current studies found no link between violent video games and violent behavior. They argue that mentally ill people will always slip through the cracks, but we as society can still do our best to prevent what weapons they get their hands on. Anti-gun supporters are highly in favor of banning assault rifle and high capacity clips.

After considering the opinions and rhetoric from both sides, my opinion is simple: the average civilian should not have access to high capacity assault rifles capable of massacring a classroom of kindergartners. The weapon used by the Newtown shooter was made for the military. Again this is just my personal opinion, but if it was made for the military maybe we shouldn’t be marketing this lethal weapon to civilians? My opinion is that automatic weapons and military style rifles should be illegal.

The arguments supporting the legalization of military weapons were summarized in a recent CNN article. They brought up the 5 most popular arguments:

1) Shooting is a hobby for some people.
2) The military style weapons are ‘cool’
3) These guns are a part of history
4) Self-Defense
5) Second Amendment 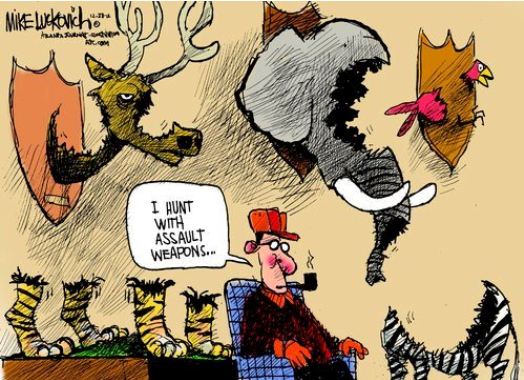 The first two arguments should be discarded right off the bat. You can use non-military style weapons to hunt. Some people believe having these weapons are ‘cool,’ but what’s not cool is that these weapons can cause massive loss of life as seen in Newtown. Sorry, but I value human life over your personal enjoyment.

The guns are a part of history? That’s cool – so are nuclear weapons, it doesn’t mean I would feel comfortable if you had one in your possession.

The last two arguments are much more rational. Self-defense is important to a lot of people. However, you have to draw the line somewhere. If you can have a military rifle then why not a military tank? Or an RPG? Or a helicopter armed with missiles?

This also intertwines with the argument of the Second Amendment. For those of you who don’t know, the Second Amendment was largely put in place to allow the people to reamin armed for their own defense and to rebel if they felt they government was being oppressive. Now I know the guys in Washington can be frustrating, but I think rebellion is a tad too far. The Second Amendment was created to instill in our government fear that if they don’t follow the will of the people we might rebel. That is no longer a realistic fear, just like rebellion is no longer a realistic option.

I don’t want to comment on the American psychiatric system or if we should arm schools, because those are complex arguments. Personally, I believe the argument surrounding military style weapons is simple: we shouldn’t have them. How many kids were wounded by the shooter? Zero. None. They were all murdered. He used special bullets that did extra damage. How can we allow that to happen? How can we allow someone to attack our children with military gear, a military rifle, and bullets designed to do extra damage? I believe that military weapons and bullets should be off the street, but obviously people believe otherwise.

Look into it yourself and determine your own opinion because gun control, just like that annoying relative, isn’t going away anytime soon.