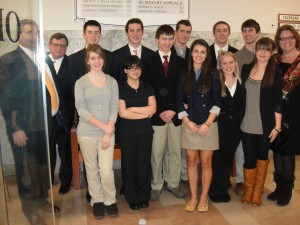 The 2011-2012 mock trial season has come to an end at Seton-La Salle. Although it was a year of transition for the team, the season was still successful and fulfilling. Before the season began, the team received news that their longtime coach, Lauren Clark Rodriguez, would be unable to return to her position. Ms. Rodriguez, who had been a founding member of Seton’s mock trial team when it was started by Mr. Daniel Carney, had coached for many years, and led the team to many regional championships and to the state tournament. While the team was sad to see her go, new coaching leadership was quickly found. In her place, Russell Ober, a South Hills Catholic graduate, and his colleague Chad Michaelson, both of Meyer, Unkovic & Scott law firm, stepped into the coaching position.

Under the leadership of the new coaches, and under the perennial leadership of teacher-coach Kathleen Slampak, the mock trial season began in October. The team held practices weekly, where new team members learned the basics of trial law and the team veterans refreshed their skills. Then in November, the case that would be used during competition was released, and the season began in earnest. This year’s case was a civil case. A small town environmental group was suing a large pharmaceuticals company in order to protect a species of rare turtle. Once the case materials were released, the roles were assigned and the preparations for competition began.

On January 31st, the team participated in their first competition. Seton’s defense team –the group that represented the pharmaceuticals company- participated in this event facing Pine Richland. The defense team was made up of three attorneys: Junior Lauren Gardonis, Senior Jake Grefenstette, and Senior Gabe Klemick; and three witnesses:  Freshman Hannah Marsonek, Sophomore Henry Glitz, and Freshman Savannah Meyers. Despite putting up a good effort, the defense team did not win the January 31st competition.

The second mock trial competition took place on February 7th, and Seton’s plaintiff team –the team representing the environmental group- represented the school. The plaintiff team, like the defense team, was made up of three attorneys: Senior Alaina Courey, Senior Jake Grefenstette, and Senior Brandon Riley; and three witnesses: Senior Leah Black, Freshman Ben Grefenstette, and Sophomore Dan Jesserer. This time, the SLS bested their opponent, Saint Joseph. However, despite this victory, the SLS mock trial team did not advance to the playoffs.

Despite this disappointing result, the season did end on a high note. The team was given the opportunity to be the jurors in the final round of a national law school mock trial competition. On February 17th, the team went to the Federal courthouse in downtown Pittsburgh to hear the case. The competition was between Georgetown’s and Catholic University’s law school mock trial teams. The case lasted all day, and the team was presented a case, based on an incident that happened in real-life, in which a woman was suing a man because she blamed him for a car accident she was involved in. At the end of the day, the jury made up of SLS students returned a verdict in favor of Georgetown’s defense team. The event was very beneficial for those students who will be participating in mock trial next year, and those graduating seniors who are thinking about going to law school one day.

Although the Seton-La Salle mock trial team did not make the playoffs this year, they are all very happy with how they performed, and are ready to rise to the challenge and succeed next year.