A new testing schedule has been developed to replace our midterm and final exams. Traditionally, students would take two, one hour tests over the course of three days, then go home. This year however, the administration has created a full-day schedule, where students will take three, one hour tests, with study, lunch, and snack breaks.  This schedule is worrisome to a lot of students and teachers alike, but the change may be beneficial to Seton La Salle as a whole. 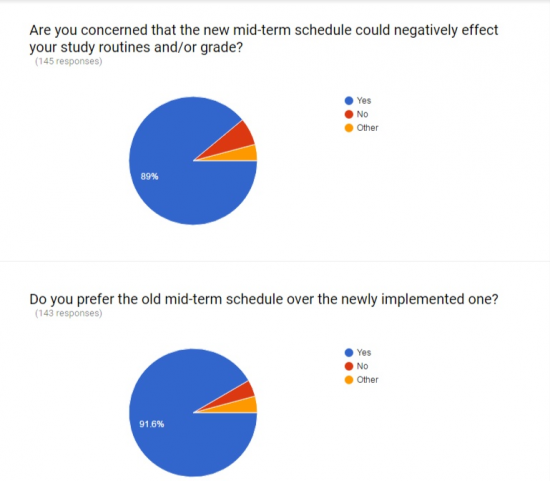 The current student body, along with many teachers, strongly believe that this change will hurt the test scores. A poll was sent out when the change in schedule was announced (before the actual schedule was finalized). Of the 145 responses, 89% responded yes to the question “Are you concerned that the new mid-term schedule could negatively affect your study routines and/or grade?” Nearly 92% preferred the old schedule to the proposed changes.

Many fear that three tests in one day is too overwhelming and the proposed study sessions will be ineffective. The study sessions will be held in the cafeteria, auditorium, and gym. Whole grades will occupy these places. Senior Lindsay Laverty stated, “I feel like the students are going to have a difficult time focusing in an environment of constant distraction.”

The hope of the administration is to utilize the group setting by studying with peers and teachers, but if things get out of hand, not only will the students who are causing disruptions fail to study, but the people trying to focus will also be distracted. Junior Josh Blamer supports Laverty’s concerns about the new schedule saying, “I don’t like it.”

The main concern of taking three tests in one day may prove to be too stressful for students. English teacher Mr. Rosenbush, an alumnus of Seton La Salle said, “I did personally like to take the two tests and go home to study”, but as a teacher, he sees the the benefits of the new schedule saying, “In seeing the schedule the school has come up with, the study sessions between each test will give the students a chance to refresh their minds.” On whether or not students will optimize their time during those study session he says, “Whether to study or not is a choice.”, and on what he expects the students to do he seems pessimistic, but says “If nothing else I expect them to be respectful of the students who do spend their time studying.”

While many are skeptical of the result of the schedule, the administration is hopeful to change a problem that goes unnoticed. Assistant Principal Mr. Michael Joyce says, “I think breaking up the tests, allowing students to study immediately prior to the exam, hopefully that helps.” Mr. Joyce analyzed data from last year, and of the 165 different classes at Seton, students in only ten of the classes averaged higher grades on the midterms than their quarter grades. These numbers show that the current system in place is in need of revision. The administration thinks that change will be beneficial for students’ grades. “Afterwards, I will do the same data analysis, and if I find out if this process was ineffective, then we will consider going back to the way things were before or to a even different system.”

This, along with other logistical reasons like busing, hours in school required by the state, and sports like bowling, basketball, and swimming that don’t stop for midterms, are why the administration wanted change.

When approached with the concern about the optimization of the in-school studying Mr. Joyce responds saying, “As for the study windows are concerned, I think if you use them for a review they will be really helpful…. But if you use them as your only study period, I don’t think they will be very effective. If you’re banking on those as your entire foundation of your studying it’s going to hurt.” He believes that if both the students and the teachers have a good, positive attitude and mindset, the new schedule will be beneficial to everyone.

Whether or not these changes will prove to be beneficial is still up in the air. As of now there is a clear line of division between the students and the administration, but if the scores improve, it will be the permanent schedule. In the words of Mr. Joyce,  “Just because you do things for a long time the same way doesn’t mean it’s the right way.”