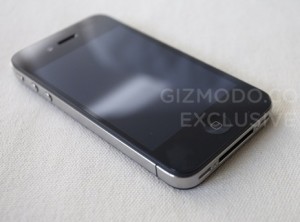 The past few days have been quite exciting for us consumers and hectic for Apple. Last friday Gizmodo, a technology weblog, received a supposed iPhone 4th Generation from an unnamed person by paying a large sum of $5000.

This iPhone was said to be lost in a bar in California. It belonged to Apple Software Engineer, Gray Powell. The iPhone was found by a person who was sitting next to Gray before he left. He later took it home so he could give it back to Gray if he could find a way to. When he woke up that next morning, something strange happened. The iPhone had been bricked remotely, which wipes out everything on lost iPhones. The person got suspicious by this, and began to take the case off and noticed the new design and front facing camera. At this time, he tried calling Apple to find out how to return it. Apple however, didn’t believe him and left him in the middle of the ocean with no one to help.

A few weeks later, Gizmodo received the device for $5000 in cash. They didn’t know if this was the real deal or just another phony. Although, after observing and taking it apart, they are certain that this is the next iPhone to come out later this year. Not only that, but Apple itself asked for the device back through a letter, claiming that it was a device that belonged to them. The hardware and the letter from Apple all point out that this could be Apple’s much anticipated, awesome, 4th generation iPhone.

Update: This turned out to be the real iPhone 4 after all released in June 2010!

The specs inside the device that Gizmodo was able to find out are:

-Micro-SIM instead of standard SIM(iPad also has this feature)

-Improved display. Not sure on what the resolution is, but with the “Connect to iTunes” screen displaying, it looks much higher resolution than on the 3GS

-Possibly a secondary mic for noise cancellation on the top

-The power, mute, and volume buttons are metallic

-The back is entirely flat, made of glass possibly, or shiny plastic

-An aluminum border going all the way around the outside

-A slightly smaller screen than 3GS, but possible higher resolution

Based on the above info and the pictures and videos provided by Gizmodo, this seems to be the real deal in my eyes. The overall design and look seems simple, yet ‘Apple-esque’ and I  really like it. What do you think about it? Do you think this is the true next iPhone from Apple? Do you like the new design? Give your opinion in a comment or vote on the poll.

Check out more pictures and videos on Gizmodo’s Website!

Credit To: Gizmodo for information and pictures on the possible iPhone.