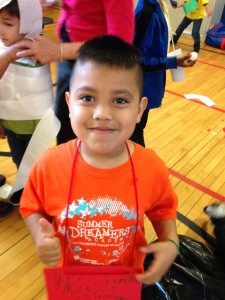 Many of you might now reflect into your past, far back in the time around grade school. If you’ll be so good as to remember, when the adults ruled, much of the time they ruled in chaos. The worst of this (or  best, depending on your perspective) was definitely the elementary school parties. (Kids everywhere, having fun in their little worlds; a couple of adults scrambling about, trying to keep the peace; toilet paper all over the place… Chaos.)

Recently the Seton – La Salle  International Club got a taste of what it’s like to be in the adults’ position. It was at Banksville Elementary, a school which possesses a number of newly integrated, international students, that they learned their lesson.

For most of the morning, the International Club was working hard to set up and maintain activities for the younger children. At the beginning, all of the students, made colorful name tags, complete with their country of origin and a picture of their favorite activity. Afterwards, they were formed into groups of six and they toured the gym playing all the games that the SLS International Club had set up.

Among these activities were mummy wrapping, (one of the boys was confused with what was meant by wrapping and asked if we were going to give them bling), bowling (with water bottles as pins), Apples to Apples Jr., cornhole, face painting, and musical chairs (every single song was ‘Let it Go’). For all of the kids, these games were great fun. 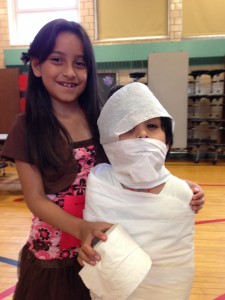 At the end of the morning, the students were gathered around into a great big circle. In the center, the International Club brought a full map of the earth complete with all of the countries where people were from. The children’s job,  was to take tokens and place them onto their country of descent.

Unfortunately though, at this point, the International Club was told that their bus back to high school had to leave early.  At the cusp of what was supposed to be a profound speech, (‘We are all really the same, that’s what matters. Not where we come from, just that we’re all good people!’)  they were ushered out of the door.

The club was slightly downcast when they found out that the children would be enjoying their juice boxes and cookies (the smily face ones) without them. Even so, for everyone involved the experience was rewarding and very fun.

I give personal thanks to Madame Beckovich for setting up and orchestrating the event; also to all the students who were able to volunteer