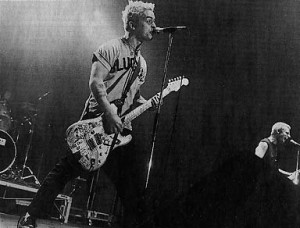 On February 1st 1994, three punks from Berkeley, California changed the history of punk rock forever. A band by the name of Green Day were about to hit it big time releasing their third record and their first on a major label, Dookie. Billie Joe Armstrong, Mike Dirnt, and Tre Cool, already being common household names on the streets of California, were about to become worldwide known, forever changing their lives. With this album, Green Day revived punk rock and forced the world to pay attention to it after being long forgotten for many years, even bringing an element of pop to the punk. While the band faced backlash from some close friends and local clubs they played at, the rest of the world accepted Green Day for making a bold move to provide new punk music for everyone to enjoy. The album spawned five hit singles: Longview, Welcome to Paradise, Basket Case, She, and When I Come Around (to which these songs remain some of Green Day’s most popular songs to date) and even won them a Grammy for Best Alternative Album. There’s no doubt about it that this album is such a historic piece of music; with catchy choruses, outstanding harmonies, relatable lyrics, slick guitar hooks and fast paced drums. Each track has special meaning to it, and this track by track review will explain why.

Burnout: “I declare I don’t care no more.” The first lyrics sung on the album. This could be the anthem for bored stricken teenagers everywhere. With a heavy guitar riff and loud bass, complete with a drum solo towards the end, this is the perfect punk rock track.

Having a Blast: This is a song full of angst with a very cool guitar intro. It’s a very angry song about an apparent break up, with Armstrong singing “close your eyes, kiss yourself goodbye, and think about the times we spent and what they meant.”

Chump: A short yet fast paced song. The highlight of the song is the end breakdown, complete with a bass solo along with hard hitting drums to accompany it. This song will keep you tapping along to the beat of the music.

Longview: Here it is. The song about boredom that brought Green Day to fame. Being the first single off of Dookie, it achieved massive radio airplay and helped the bad to become more known. The song is most memorable for Dirnt’s melodic bass line, showing off his true skill in the song.

Welcome to Paradise: Originally recorded on Green Day’s 1992 album “Kerplunk!”, the band made the decision to re record it and throw it on Dookie, and what a wonderful decision that was. It’s straight up punk rock. Each member delivers a wonderful performance on their instrument, and just like “Chump” there’s a breakdown in the middle of the song that features bass and drums.

Pulling Teeth: A song about feeling in distress, something everyone can relate to. It’s complete with a fancy yet simple guitar solo that will leave you humming the tune to yourself for days.

Basket Case: Even if you’re not a fan of Green Day, everyone (and I mean EVERYONE) knows this song, part of the reason 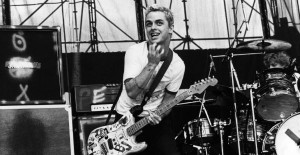 being it is unbelievably catchy. Another song about distress, but also of panic attacks, paranoia, and “giving yourself the creeps.” Armstrong wrote it about himself, how he was feeling and what he was going through. He literally thought he was going crazy. The band even filmed the music video in an abandoned insane asylum as a nod to the “crazy” element. “Basket Case” is one of Green Day’s most popular songs, no doubt about it. The song is literally perfect, with a melodic guitar part provided by Armstrong, Dirnt plucking away on the bass, and Cool beating away senselessly on his drumset.

She: Green Day’s last single off of Dookie. It’s a short and sweet song with a wicked bass line about Armstrong’s ex girlfriend, and how she left him to move to Ecuador. Surprisingly, the girl in the song was the inspiration for many other Green Day songs in their career as well.

Sassafras Roots: Another track about being bored, just hanging out, and being lazy, all with the fear of becoming a burden to others. The track delivers an excellent performance from the band with all their playing of instruments staying in perfect unison with each other.

When I Come Around: Another of of Green Day’s greatest hits. It received massive radio airplay and even topped multiple charts for several weeks. It’s another sweet song written about Armstrong breaking up with his ex girlfriend (a different girl than previously mentioned), whom he later married.

Coming Clean: The shortest song off of Dookie deals with growing up and wondering what you’re going to do in life, a lesson in which we can all take note of.

Emenius Sleepus: A song dealing with an old friend who you haven’t seen in a while, only to find out they are not who they used to be. Fun fact, this song was actually written by Dirnt and not Armstrong, who is the band’s primary songwriter.

In the End: Another autobiographical song written by Armstrong, dealing with his mother. After the death of his father, his mother began to see another man, who Armstrong disliked. He seemed to only care about his image, and not for Armstrong and the rest of his family. He just wanted “someone to look good with” and Armstrong “hope’s he wouldn’t be there in the end when he comes around.”

F.O.D.: Another Green Day song filled with lyrics of angst and hatred! It’s about that one person you absolutely cannot stand. The irritation of this person is “burning in your gut” and eventually you are going to snap, scream, and let it all out. The song starts off quiet, with just Armstrong singing and playing guitar with no distortion, but as we get near the end, the distortion comes on as the whole band 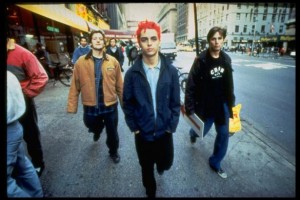 chimes in for one last time on the album. Fun fact: No matter what you’re listening to Dookie on, whether it be CD, vinyl, or even cassette tape, do not stop the song! If you keep it playing for about two more minutes, a hidden track entitled “All by Myself” can be heard. It just features Cool singing and playing guitar, but it is totally worth it.

If Dookie had never been released, we might not have some of today’s bands in the world. It has such an impact not only on punk rock, but in the whole state of rock and roll in general. Nobody ever would have thought that three punks in their early twenties with green and blue hair would ever have made it as big as they did. Green Day themselves even have to know how influential not only the album became, but how influential as a band they have become. Recently at live shows, the band have been performing the album from start to finish, the first time in ever they have been doing so. While most of the album’s song are a setlist regular at live shows, certain songs have just been played live for the first time ever! Hopefully Green Day will even do a Dookie 20th Anniversary Tour this year! (and possibly combine it with an “American Idiot” tour since that album celebrates its 10th anniversary this year, and these two albums being the band’s biggest hits.) If you ever get free time in your life, and have not heard the album yet, give it a listen. It is only about 33 minutes in total, and trust me, you will not be wasting your time. Oh, and do not forget to crank the volume up to 11 while you are listening to it.