If you’re into music and haven’t heard of Green Day, you must be crazy. Being one of the world’s best selling rock bands, it seems like they can take a risk at anything, and the outcome will always be great. On Tuesday, September 24 2013, the band released a documentary entitled “¡Cuatro!” a documentary featuring an in-depth look at the making of their trilogy of albums, “¡Uno!” “¡Dos!” “¡Tre!” released in September, November and December of 2012. The documentary was technically released back in April to those who pre ordered the albums back in summer 2012, but was officially released to the public on the date mentioned above.

The documentary stars the band Green Day:  lead vocalist/guitarist Billie Joe Armstrong, bassist/backing vocals Mike Dirnt, drummer Tre Cool, and guitarist Jason White, who, from 1999-2011, was only the bands touring guitarist. This time around, they’ve brought him into the studio to be an official member of the band.

It follows their journey of creating these albums and how they came to be. It starts off with a quote from Armstrong about music, leading up into a music filled introduction with the band playing “Stop When the Red Lights Flash”, a fast paced song off of “¡Dos!” 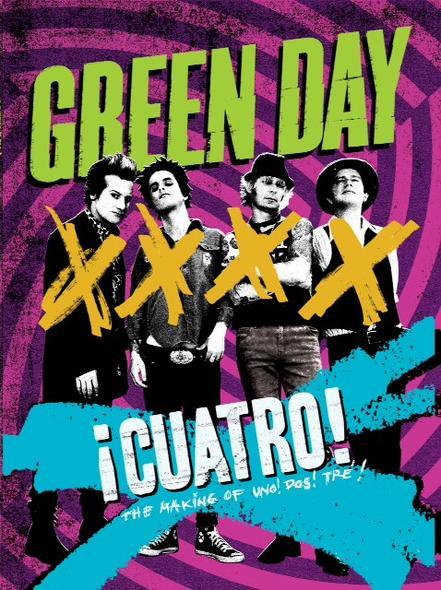 We are now in the late months of 2011, where the band are showing rehearsing new material that Armstrong, the main songwriter, has written. The band then start playing some new songs, “Stay the Night” off of “¡Uno!” and “Wow! That’s Loud” from “¡Dos!” They discuss how they feel about these songs and move on to some new ones. The documentary skips and skims through various portions of the band recording and hanging out in their studio, playing new songs and goofing off in the process, but some key features shown in the documentary are the secret shows Green Day played to test some of the new songs out. During the late months of 2011, the band held several shows filled with all new material. Armstrong described this as “not doing this in 20 years”, with Cool chiming in with the same thought. “We haven’t performed a set full of new songs since the “Kerplunk!” and “Dookie” days,” he stated. One secret show, held in California, kicked off with a track from “¡Uno!”, “Nuclear Family”, and the crowd went crazy. Another show, held in Texas, featured “Oh Love” (also from “¡Uno!”), which was the band’s first single from the trilogy of albums.

Without trying to sound too repetitive or redundant, the documentary mainly just features an in- depth look at how these albums were recorded. It also features a selection of some songs from  ¡Uno! ¡Dos! and ¡Tre! It gives you a nice little soundtrack to enjoy as you’re enjoying the flick. The film depicts the band traveling around to different studios, playing more secret shows, and spending time with family.

The last scene takes us to August 2012, just one month before the first album is due out. Green Day is getting one last secret show in, and they’re going to make it big; and they did. They played for half the night, including brand new songs and old favorites. The sound draws out while they are playing, before one final scene of a quote from the band’s manager, Rob Cavallo, about how this band is capable of many things. One of the best things about this whole documentary is that it really shows how good Green Day are at all the aspects of artistic music creation. We get a look at the good writing skills, performing skills, and it just shows what nice, down to earth people they are.

While I’m sure the fans enjoyed the albums very much (I, for sure, did), the three albums did not get the promotion or appreciation they deserved due to Armstrong’s trip to rehab in September 2012, checking in a day before the release of “¡Uno!”. The band were forced to cancel all promotional appearances for the albums and even had to reschedule the tour. Luckily, he is better now, and this documentary satisfies most hard core fans about the time that was lost for the trilogy’s promotion. This documentary really does prove to be promising, and gives you such an amazing appreciation of one of our world’s most hard working bands.

What is next for Green Day? Who knows. This band is always full of surprises. Will we see anymore behind the scenes footage? According to Dirnt; “there is so much more film clips that were not used in “Cuatro”, and we’re hoping to release more of the footage sometime in the future.”

We can only hope the future is good for Green Day. A quote  by Armstrong in the documentary really gives me high hopes of the band’s future. “Forget the past, forget the present, think about the future. That’s all you need to worry about.” So let’s forget about the rehab, forget about the lack of promotion, that’s in the past. It’s long gone. Green Day just keep getting better with age, so I’m sure the future holds great things for them.”

White said “I think that there’s things that this band can do and that Billie can do as a songwriter that people still don’t know about.” With the 20th anniversary of Green Day’s 1994 breakthrough album “Dookie” and the 10th anniversary of their 2004 mega hit “American Idiot” coming up next year, who knows what we can expect from one of America’s greatest bands.

Here are some links to some of the songs from the trilogy of albums. You can check out the albums on iTunes or by picking up a physical copy of Uno, Dos, or Tre from any store that sells CDs.

From ¡Uno!: Oh Love (as I stated above, this was chosen as the lead single for the album and was the song that achieved the most success out of all the other songs on the three records), Nuclear Family, Carpe Diem

From  ¡Dos!: Stray Heart (personally, this is one of my favorite songs out of the entire trilogy, and I’m sure if you give it a listen, you will enjoy it!), Stop When the Red Lights Flash, Wow! That’s Loud

Keep in mind that these are not all the songs from the three albums. I just chose a select three from each album that had no vulgar language so I could share them with you. There are lots more exciting songs to check out on the records! A vast majority of the songs from the three albums are featured in the documentary, so I’m sure you can find some songs that appeal to you when watching it!