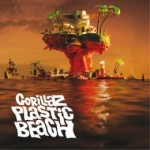 While some might’ve thought that the Gorillaz died away after their hit Feel Good Inc. in 2005, the cartoon band has made a come back with their new album Plastic Beach. It’s hard to describe this band without referring to their “story”. As usual the band has some crazy incident that leads to the making of a new album. In their amazing cd Demon Days, the keyboardist, Noodle, was Fed-Ex’ed from Japan to the bands humble abode. This time it’s the bassist, Murdoc, kidnapping the made up lead singer, 2D, by knocking him out with gas and stuffing him in a suitcase. Somehow the other band members show up on the island. And Plastic Beach was born.

Their strange techno/indie/hip hop/pop style is oddly entrancing. The song Rhinestone Eyes is easily the best. 2D’s vocals can only be described as the velvet he achieved in old song Clint Eastwood.

The first single, Stylo, features rough Mos Def and Bobby Womack. Fun fact: Womack was told to just sing whatever came into his mind… Yet another factor to add to the Gorillaz odd yet creative style.

Many people dismiss the band as music that doesn’t matter or just doesn’t make sense. I thought the same when I first heard Demon Days in ’05. But after listening to the entire cd and giving it a chance, I’ve fallen in love with the cartoon band. I hope you’ll give them that chance too.