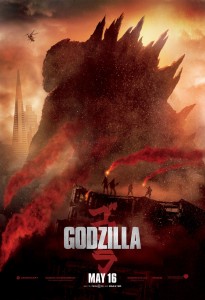 When somebody mentions monster movies, who is the first name that comes to your mind? You are most likely going to think of Godzilla. The King of the Monsters is returning to theaters this May after a ten year hiatus. This film will serve as a reboot to the franchise and it may be his biggest film yet.

First appearing in Toho Pictures 1954 classic Gojira (“Godzilla” in English), Godzilla has come a long way to achieve the popularity the franchise has accumulated over the years. With over 25 movies, this year’s film will be the second American produced Godzilla film, the first being released in 1998 that was a re-imagining of the monster’s original attack. This movie was met with negative reviews because of a lack of staying true to the franchise and a lack of the monster even remotely looking like Godzilla.

The new film promises to take a more realistic, faithful approach not only to the character, but also to the aspect of reality, as in what if this disaster was happening in modern times.

The film is being directed by British newcomer Gareth Edwards, who wrote and directed his previous and first movie Monsters. Hollywood caught up with the success of this film, and Warner Bros. & Legendary Pictures booked him to direct Godzilla. It stars Aaron Taylor-Johnson, Elizabeth Olsen (Mary-Kate & Ashley’s younger sister), and none other than Walter White himself, Bryan Cranston. 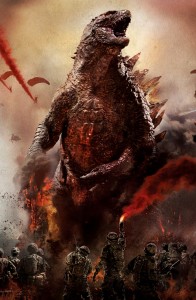 The Godzilla reboot will serve as an origin story to the character’s mythology. A plot is unknown at this time, but Legendary Pictures stated that in an official press release, the film is “An epic rebirth to Toho’s iconic Godzilla, this spectacular adventure pits the world’s most famous monster against malevolent creatures who, bolstered by humanity’s scientific arrogance, threaten our very existence.” What is known about the film though is that Godzilla will be wreaking havoc through Hawaii and San Francisco. Some scenes will take place in Japan as well, where Godzilla originated from. He will battle a new enemy in the film, currently dubbed as “Muto.” 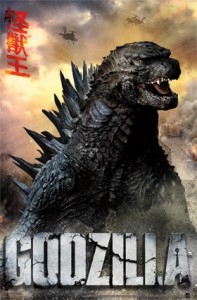 Godzilla is going to be big…literally. Standing at 350 ft. tall, 2014’s Godzilla is the biggest one yet. Edwards promised to stay true to the original element of the creature. Speaking on the design, he stated that he imagined the Big G as “a real creature that someone from Toho would have saw back in 1954 and ran back to the studio to make a movie about what they just saw, trying their best to remember to draw it. In our film you get to see him for real.” Godzilla looks like his classic self in all his glory, and most importantly, he has his signature blue atomic breath and his trademark roar, updated with a modern twist.

Marketing for the film recently just began. Multiple trailers have been released along with screenshots from the film. Even a Snickers commercial has been released promoting the film. Action figures and posters for the film have already hit stores, and everything from shirts to party supplies will be available in the upcoming weeks.

Godzilla hits theaters May 16, 2014 in 2D and IMAX 3D. Will it be this summer’s big blockbuster? We will just have to wait and find out, but judging by the recent hype over the film, it has the potential to do so.