Almost all of our fall sport moved up a section in the wpial sections, and volleyball was no exception.  Unlike the other teams though, they were one of two that entered their new section being lead by a new coach. Kevin Hummert, coming from coaching Shenango, eagerly jumped into coaching our Seton Rebels to many victories among their new and tough competitors. Though he wanted to win the section, the girls did better than anyone had anticipated and took the second seat beating out some tough teams such as South Park. They even took a game away from South Fayette(section winners) early in their season.

After seating second our Rebels had to battle Central Valley for a chance to make it into the playoffs. After a hard game, we came out with a victory with a score of 3-0. Due to this win, this Tuesday, October 23, the girls took on Knoch, who is one of the top 5 teams in the WPIAL rankings. Naturally, as the underdogs, we were expected to lose. Unfortunately for Knoch our girls came to win and beat them out 3-1 in one of the most intense volleyball games I’ve seen our girls play.

After this huge upset the volleyball team went on to play Beaver on Thursday, October 25, at Mars high school. After giving them the first game the Rebels kicked it into gear and stayed focused on what they went there to do. Though the games were close, we took the next three giving us the win and the chance to continue on in the playoffs.

We all wish nothing best for the Girls’ Volleyball team and their new coach because they’ve been working so hard since summer and it’s all paying off. They will be playing Indiana on Tuesday, October 29. Try to come and watch our girls continue on from the elite 8 and show all the teams that expect easy victories what they can do! More information about this next playoff game will be released at school if your interested in attending, so keeps your ears open!

This year, the Seton-La Salle girls volleyball team has a new coach, Kevin Hummert. The team has only lost one game so far this season, which many people credit to the new coach. Here is the Rebel Report exclusive interview.

Q. What is your name? 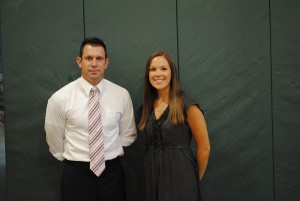 Q. Did you grow up around here?

A. Yes, on the other side of Pittsburgh near Monroeville.

Q. Where did you go to school?

Q.Do you have family in the area?

A. Yes, a wife and daughter outside of Cranberry.

Q. Why did you take the job here?

A. It’s a good athletic school.

Q. Do you have a motto or catchphrase?

A. “Flip the Switch”

Q. How long have you been a coach?

Q. What other schools have you coached at?

A. Ambridge, Seneca Valley, and Shenango.

Q. How does this team compare to other teams you have coached?

A. It’s the most fun and has potential to be one of the better teams.

Q. Do you think the team has changed since you took over? How?

A. They have improved. They participated in a dedicated off-season program.

Q. Which team do you think is our biggest competition?

Q. How is the season going?

Q. Do you think we can make it all the way to the top?

A. We have the chance to be one of the top teams.