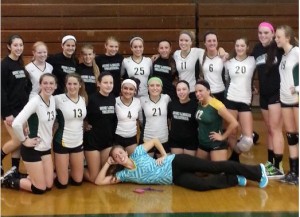 The girls varsity volleyball team is off to a strong start going into the middle of the season.  The team is currently 7-1, says Lindsey Farley, a senior defensive specialist.  Not only is the team undefeated, but it is also ranked in the top ten of the AA in WPIALS!  The team, coached by Kevin Hummert, has an all-star starting lineup including sophomore, Michelle Sanders, juniors Laura Nath and Morgan Henderson, and seniors Brianne Colligan, Shelby Williams, Juliana Ross, Lindsey Farley, Tia and Toni Torchia.  Other members of the varsity team include junior: Sommer Waskiewicz and sophomores:  Nicole Colligan and Jenna Vojecky.

After losing three key players, Abby Koval, Alex Schilken, and Angela Heintz, the team had some adjustments to make. When asked if there was a big difference after losing last year seniors. Farley said, “Of course we miss our seniors, and it’s a big difference not having Angela’s (Heintz) leadership, but I think every one of the seniors have stepped up in their own way and we have a great squad this year.”

Most high school sport teams have a different rituals before the start the of a game.  This is not different when it comes to the Lady Rebel volleyball team. Senior Toni Torchia, an outside hitter, says, “After warm-ups Lindsey leads the prayers and then I scream ‘Can I get an amen?’ and everyone yells ‘AMEN!’ Also it’s kind of weird, but Lindsey asks the team what their favorite vegetable is, and we all yell ‘turn-up’.”

After asking senior Shelby Williams, a defensive specialist and setter, if the team needs 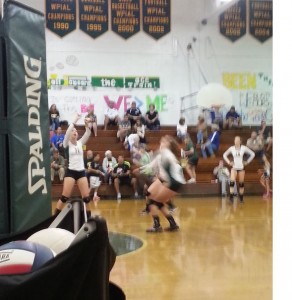 more fans to help cheer them on she replied, “YES! We all feel like volleyball is kind of a neglected sport at Seton, because we never get a solid fan section.

“We’re really good this year and would love fans.”  The team would like to go far into the WPIAL playoffs and hopefully end up going to states.  So come support your Lady Rebels as they try to remain undefeated in their section!