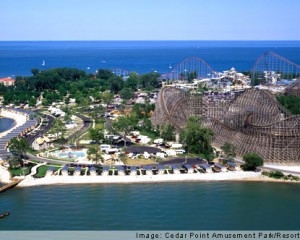 This year, while the upperclassmen are busy dancing in formal wear, we underclassmen will be getting to the point.  Cedar Point!  On May 18th,  9th and 10th grade will be going to Cedar Point to enjoy a day full of fun and thrilling rides. But is there anything new this year at the park? According to the Cedar Point official website, there are 2 new attractions and a new riding system.

One of the new attractions is called Dinosaurs Alive! It is a small exhibit with full motion animatronics. There are 15 different dinosaurs each showing how they lived, and what environments they thrived in. The attraction is isolated from the rest of the park by itself on a small island. It is a $5.00 extra charge and is more for younger children who are not ready for any big coasters yet.

Another attraction is called Lumination. This takes place at night close to closing time, and it has a full dance floor and lasers. It also has the newest pop and hip-hop music and has pyrotechnics. Chances are that we will not have enough time to enjoy Lumination due to how early the busses leave, but this is something to look forward to if anyone goes at another time.

The new riding system is called Fast Lane. This allows people to buy a front of the line pass for any ride, but the catch is that there are specific times for specific rides throughout the park. Kennywood, and other major amusement parks, like Universal Studios and Disney World also have a system like this. If you are familiar with theirs, then you should feel comfortable with Cedar Point’s new Fast Lane.

Also, a ride that was added last year, but was not open yet, is now open and ready for riders. It is called the Windseeker, and it rises 301 feet above the park and spins at 25 mph. Riders sit in seats like the swings at Kennywood, but much higher. It is also high enough that riders can see Canada.

Cedar Point is known as the roller coaster capitol of the world. It has earned the shores of Lake Erie earned the title of the Roller Coast. The best roller coaster is the award winning Millennium Force, which was the tallest and fastest ride in the world when it opened. It was also named the world’s greatest ride award when it opened and still atracts riders from all over the world. For those who aren’t coaster fans, Cedar Point has more than just roller coasters; it also has over 30 thrill rides and three water rides.

For Sophomores that were at the park last year, all of the same rides are there. For all of the Freshmen that might be going for the first time, Cedar Point is definetly a place to have fun and get your adrenaline pumping. Also, to people going with Seton-La Salle for the first time to Cedar Point, make sure that you take a pillow for the ride home, because you will be exhausted!