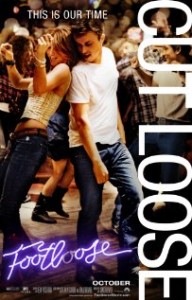 The Rebel Report was able to get an early screening of the new ‘Footloose’ remake, coming to theaters this October 14th. There are so many other remake films that are disappointing, so you’re probably thinking that this would be true for ‘Footloose’. It is hard to duplicate such a successful film, as the original 1984 classic, but this new movie does add something to it. The remake gives a modern edge to the original plot, but in no way does it try to surpass the original. It is good news if you like the original movie because most of the dialogue and many of the scenes are exact replicas of the original. Some viewers may not like this, but for me it made the film more comfortable having an idea of what was going to happen. The film was fun and of course filled with great dancing. It’s a film that I would watch again and again just like the original ‘Footloose’. Overall – a great movie!