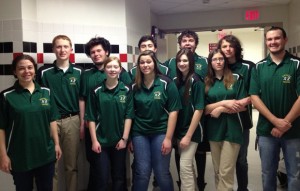 The sport of fencing is believed to be a very strategic and elegant sport.  It is a sport that has been around for a long time now and was first invented in the 18th century.  It was established in none other than Italy and was later improved by the French.  This sport is in it’s prime when it is competing at its highest level every four years in the Olympic games.  The best athletes in fencing come every country around the world to compete for the number spot of the number one fencer in the world.  Although our Seton – La Salle fencers are not competing for the Olympic gold just quite yet, they are doing a pretty awesome job for being high school student athletes.

Ryan Trivus, a senior for the Rebels fencing team, had some positive things to say about his team and the type of year they are having.  He said, “We have been somewhat successful, although neither the boys or girls team is undefeated.”  Ryan was quick to say that the team’s toughest competition this year was by far Upper St. Clair.

He also felt strongly about who the top fencers on the Rebels team are.  Ryan said, “The top boys are myself and Nikoli.  For the girls it is Liz.  Not taking anything away from the other girls, they just have little experience.”  Ryan is doing a great job so far this year leading the boys team to a successful season.

Another young man on the team I had the opportunity to ask a few questions to was Nikoli Heiser. Nikoli Heiser is a junior and is having a great year individually and contributing immensely to the 2012-2013 team.

The Rebels coach for the fencing team is a very young coach, so I asked Nikoli how he felt about this and if it in his opinion has helped their success this year.  He said, “She has been in the fencing community since a baby learning the trade.”

“The season is going much better than last year,” said Heiser.

Liz Wildenhain gave me a third perspective on the team and the year they are having when I get to talk to her. Wildenhain, who is also a junior here, is very well known for her tremendous academic accolades, but what people don’t know is her outstanding ability to fence.  Ryan and Nikoli both told me that she is for sure the best girl fencer they have.  She also gives great leadership to the younger kids on the team through her experience.

“As a number of fencers are new to the sport and will be here next year, the future looks bright,” said Wildehain.  That is a great sign for the Rebels fencing teams to come.  She also agreed with Trivus that their toughest competition has been the match against USC.  She believes that Fox Chapel will give them some trouble as well. Regarding their coaching,she said, “The fact that our coach is so young helps her relate to our current situation, trying to balance school with a sport.”

After talking to these three great fencers I got a different perspective on the sport.  They are all very compassionate about it and work very hard to be successful.  Great job so far this season Ryan, Nikoli, and Liz. All your fellow students, as well as teachers, are pulling for you to continue to do well.