Three Seton – La Salle students, just this year, have signed a letter of intent to attend Division 1 colleges due to exciting scholarship opportunities.

Many athletes start at a young age playing a sport they like. As they grow older so does their desire to play. They put in a lot of time to become a top player. Their hard work pays off for some of these athletes as they become Division-1 college recruits. As a Division-1 recruit there are many steps that are taken and many choices to make. Players have to look what choices are best for them. I interviewed three Division-1 athletes from Seton-La Salle High School to get their input on how they chose the college they committed to. 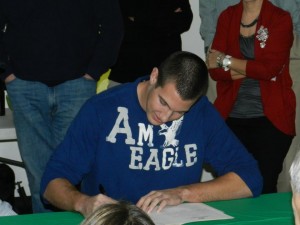 Scott Orndoff always dreamed of playing football for college. Orndoff said, “I would always create myself as one of the players on the video games but never thought that one day I would be one of them.”

“The coaches are the same guys I have always liked since my recruiting process began. The support that is given here is also a big  reason why I chose to go here,” said Orndoff.

He felt the most important thing while looking at the colleges was to be able to feel comfortable with the coaches, on the campus itself, and with the people around him. Scott is already at The University of Pittsburgh as a ‘green shirt freshman’ preparing for the 2013 Panther season. 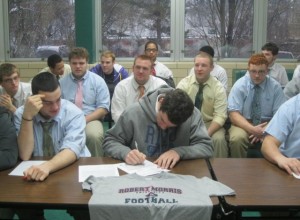 Luke Brumbaugh also always dreamed of playing football for a Division-1 college. “I never really understood how hard it was to get to that level,” acknowledged Brumbaugh, now that he has succeeded.

Luke proved to people that he had worked hard. He had scholarship offers from Youngstown State, Cornell, and Robert Morris University. Brumbaugh signed to play for Robert Morris on February 6, 2013.

Brumbaugh really liked the academic side of Robert Morris, not just the football side. Robert Morris has some great majors that he was interested in. He loved the coaching staff and he feels confident they will take care of him in this next level of his career. Brumbaugh feels academics helped him decide as he was being recruited.

He said, “Your education is ultimately what matters. In the end very few players get to play professionally in football.” 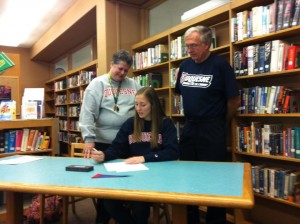 Angela Heinz always wanted to play basketball for Duquesne University. She would wear Duquesne gear and talk to coaches about how she was going to go there. She is now going to live her dream. She had other colleges interested in her, but knew that Duquesne was where her heart was.

“I liked the atmosphere, it felt like home. Plus being able to go home anytime I need to is a huge plus. The fact that my parents can come to all of my home basketball games means a lot to me. I love the coaches at Duquesne and it is a great school,” said Heintz.

Duquesne is a great athletic and educational school according to Heintz. She is such a hard worker on the court and in the classroom, it is great to see her dream has come to life.

These three athletes are all excited to take their next step, to play for a Division-1 college. Some advice they would tell younger athletes is to work super hard – during the season and especially the off-season. Keep working hard everyday. Don’t just work on your athletics, but keep up your grades.

Good grades, according to our recruits, will help the student-athlete more than they might  imagine. If the hard work pays off and colleges are looking, be sure you are making the decision for yourself, no one else.

Good Luck to Angela, Luke, and Scott as they start a new path in their life. They all have what it takes to go far. So go and live out your dreams, we here at Seton are proud of you.