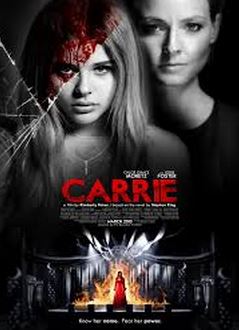 Directed by Kimberly Peirce, and based on the novel of Stephen King by the same name, Carrie is a film remake of the original movie of 1976, which was directed by Brian De Palma. Carrie White is the movie’s protagonist; she is a very melancholic victim of her peers, and because of that, she turns into a product of their contempt for her. Carrie is played by the actress Chloe Grace Moretz, and she does a good role of detailing the miseries experienced by the protagonist. Carrie White taps into psychic powers to deal with her stress, and she uses them against her peers. Ergo, this movie is practically based around one scene: the prom night scene.

This scene is exemplified with a brutal massacre of her peers, the same ones who influenced her hateful resentments. My gripe with this movie is that it seems to focus too much to the building up of this scene, and the movie itself does not express the story of Carrie White like the original 1976 movie. The movie also did not take advantage of the CGI technology to deliver the massacre that the original could not have delivered. Carrie White’s mother is not as frightening as she once appeared, and the rest of the characters seem too forgetful to even try to remember.

The movie updates the sense of bullying that Carry experienced, with cell phone and Youtube videos. The movie made attempts to help pave the understanding of current bullying with the use of social media. I do like the attempts this movie made, but I just do not like the execution of this movie as a final product. While it was not bad; it certainly was not good. If the title of this movie were changed to something else, perhaps I could appreciate it more. I would like recommend this movie for fans of the genre, albeit not of the original, as it simply does not live up to the expectations followed by the original film.