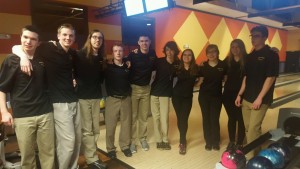 The Seton-La Salle boys’ bowling team is currently the best it’s ever been. With a five wins, three losses record, the team had a great chance of making playoffs this year.

Head Coach Mark Wright has led the boys in their best season so far. Not only has the success for them grown, but the popularity and fan base has too. Every morning there is a bowling update on the announcements from self-proclaimed bowling member and hype-man, Jimmy Lydic, and it certainly doesn’t disappoint.

Freshman Xavier Huetter says, “It’s been really good this year, actually. This is the first year we’ve gone over a five-hundred record, and we even have a chance to make playoffs! Dominic Matts, the team’s anchor, is going to be the first boy to go to the playoffs individually.”

With this much success and publicity around our boys’ bowling team, there is more pressure. Huetter doesn’t believe it will effect play, and you can expect your Seton-La Salle boys’ bowling team to continue on their path of success.

Mr. Zugates, the bowling moderator, was asked how the season stood out to him as opposed to past years. “It’s been an epic year in several respects. We are at an all time low with the girls team and an all time high with the boys team. Although their overall losses outweigh their wins, the girls team has won a match against an undefeated team outside of their section! Our boys bowled the best they have ever have as a team. They only missed setting the school record by 9 pins. Because we will only lose one starter, next year seems very promising.”

Dominic Matts and Marcus Huetter will be the first boys to go to cities for Seton-La Salle. “People came to me for advice.”, said Matts when asked what the best thing was about being team captain during his senior year. That advice has certainly paid off and hopefully the younger players will continue this path of success next year!