(The moderator of the Rebel Report would like to extend an apology to Mr. Zinoble for neglecting to publish this review in the last quarter. – so sorry, Dan.  Strictly an oversight on my part.) 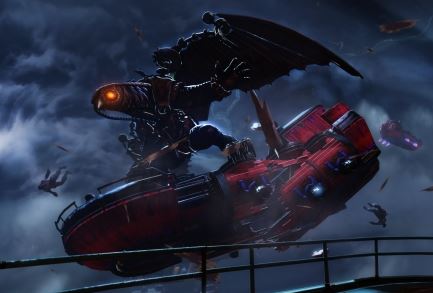 Bioshock Infinite is a spellbinding, action-packed thrill ride of a game that is absolutely worth the time and money of any who consider themselves serious gamers. Rising head and shoulders above most current first-person shooters, this game proves itself a worthy successor to the original 2007 game simply titled Bioshock, which is regarded as one of the highest rated first-person shooter games of all time.

While not a direct sequel or even a prequel to this first game, Bioshock Infinite is like its predecessor in many ways, sharing themes such as fantastic locations, mind-bending storylines, and dystopian worlds; while still including themes of its own. In order to explain what makes this game so great, I decided to analyze its story, gameplay, audio, aesthetics, and replayability, piece-by-piece, to give a clear understanding of what sets this game apart.

Bioshock Infinite is definitely not a game for those who tend to ignore storylines. By far its strongest aspect, this game has an incredible story that only gets more complex as one tries to analyze it.

The year is 1912; you play as Booker Dewitt, a former Pinkerton agent who is given an offer: his gambling debts will be wiped away if he journeys to the floating city of Columbia and rescues a girl imprisoned there. This girl, Elizabeth, has incredible powers, with the ability to open “tears” to alternate universes and possibilities. These tears become the main focus of the story, so those easily confused with such concepts as time travel and alternate dimensions may find it a bit impenetrable. I, for one, had to look up an in-depth explanation of the ending in order to fully appreciate it. However, most who pay attention to the story will be rewarded with an intricate and mind-blowing story that explores themes such as xenophobia, racism, and the extreme Andrew Carnegie-style oppression of the working class that was so common at that time period, as well as the violent uprisings that result from it. Truly a deep game, Bioshock Infinite’s story really left a lasting impression on me.

Those who are not too interested in story will still have a great deal of fun with this game because of its gameplay, which is intense, fast-paced, and varied. Most of the campaign will be spent in combat. The right hand of the character wields conventional weapons such as shotguns, machine guns and rocket launchers, while the left hand wields what are called “vigors”– basically special powers infused into the character, giving him the ability to throw fire, catch and return bullets, and pull enemies close from far away, among many others. Another great gameplay mechanic is the skyrails, which allow the character to travel around quickly during combat and strike from above. The game also makes use of Elizabeth’s manipulation of tears, giving the player the ability to summon med kits, ammo, or turrets from thin air. overall, the gameplay is balanced and extremely engaging. I had a few minor qualms with it, such as the two- gun limit that seemed unnecessary and limiting, and many times there was a cut scene where it didn’t seem necessary or no cut scene where It would’ve seemed appropriate. But overall the gameplay is excellent.

The music and sounds of Columbia really do a lot to add atmosphere to this game. The voice acting is excellent, with my personal favorite being the actress who portrays Daisy Fitzroy, and the music is all carefully composed, all sounding beautiful, and with a few songs that may surprise those who listen carefully…

The aesthetics of this game are for the most part excellent. While the graphics of this game are not the best in the world, characters as stylized in such a way that not only does it not matter, it also means that they look even more vivid and full of energy than what a “photorealistic” character model does. The city is bright and colorful with tons of care poured into detail and design, and the city design, artwork, and lighting really add to the atmosphere of the game.

Bioshock Infinite does have a multiplayer online mode, or even co-op, which may turn many away from buying it. However, I found it to be extremely replayable. As soon as my first playthrough had ended, and all the twists of the story had been revealed, I immediately started up a new game, just to catch all the hints and plot details that I missed in my first playthrough but were obvious to me now. The very ending may hurt replayability for some, however, as much of it is either cutscenes or walking down linear corridors as the story is revealed to you, with not much happening in the way of gameplay. This can make the ending a bit of a chore to go through multiple times. but personally, after I finished my second playthrough, I started up a third, which certainly says a lot about its replayability.

Overall, Bioshock Infinite is a fantastic game. Personally, I know I am a bit biased, as the Bioshock franchise is my absolute favorite series of games. However, I think that others who give it a try will really enjoy how unique and fun it is, and followers of this franchise will be rewarded with a few easter eggs and nods to the first game. If you are a gamer interested in something different and fun, this is worth your money.