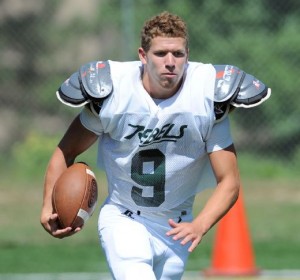 Kevin Hart, a senior, sat down with the Rebel Report this week before the WPIAL semi-final game against the Jeanette Jayhawks to answer some of our questions.  Kevin is a leading rusher in the WPIAL and was recently chosen as the Century Conference’s Most Valuable Player.

RR: Is there another offensive position you would like to play?
Hart: Yes. I have been waiting for my chance to be quarterback, but I think Luke has that covered.

RR: Who is your favorite blocker to run behind?
Hart: Rob Beck, low to the ground and power, he is definitely my favorite to run behind.

RR: Which do you prefer, the pass or the run?
Hart: I prefer the run unless I am catching the ball. I’m not really the best blocker.

RR: Who is your favorite professional football player?
Hart: Ryan Clark of the Steelers

RR: Do you have any brothers or sisters who play sports?
Hart: I have three sisters. They all play sports. My older sister plays soccer, Katherine plays basketball, and my youngest sister plays a ton of sports.

RR: What is one invaluable thing you’ve learned from a coach?
Hart: No matter what you do, hard work and determination are the things that take you where you want to go.

RR: Do you have a hobby or interest that people might find surprising?
Hart: A surprising interest of mine is making movies. I have made multiple.

RR: It was our perception that you had too much playing time in the last game against South Fayette. Do you ever feel the coach overuses you?
Hart: No, he never over uses me. I love being out there. The best part for me is being on the field for every play.

RR: In the game against South Fayette, Coach Perry called you out in the third quarter. You ran 99 yards in an 8 play drive and clinched the win for the Rebels. Did you feel the accomplishment or were you too tired?
Hart: It was a big point in the game, a vital point. Driving those 99 yards I felt I accomplished something for the team, but I was dead after the long run.

RR: Tell us about being chosen Century Conference MVP. How did you hear about it? Were you prepared or surprised?
Hart: Coach Perry told me. I was really honored. Being in such a good conference there are so many good players. I didn’t expect to be the conference MVP.

RR: What are your future plans?
Hart: I plan to play football in college. Not sure where though.

RR: Coach Perry was quoted in the Post Gazette saying:
“The thing that makes him different is his ability to catch the football,” Perry said. “He did run for a lot of yards, but he caught about 30 passes — six of them for touchdowns — for us last year. That’s what separates him from other players, and he’s able to run the 40[-yard dash] in about 4.4 [seconds]. He had that time in two camps he went to at Richmond and Villanova.”

Do you agree? Is your ability to be a receiver as well as a running back what makes you different?
Hart: I definetely agree. I think it is an added factor to have a versatile player. Being able to catch the ball really helps out.

RR: We read that your dad played for Mt. Lebanon and that is where you currently reside. Why Seton?
Hart: I went to St. Bernard and I heard a lot about Seton. I actually wasn’t sure where to go until 8th grade. I picked Seton because I felt comfortable meeting kids who went there. It was a good decision.

RR: Is there a former SLS Rebel who inspires you?
Hart: Yeah, there are two. Joey DelSardo who played receiver in college (Pitt) and was a good athlete. Also Derek Law who is now a minor league pitcher for the Giants. I knew him pretty well.

RR: What do you have to do against the Jeanette Jayhawks this week to be victorious?
Hart: We’re a pretty athletic team so we just need to contain them, and hit them harder than they hit us.